Crisis for the Planet 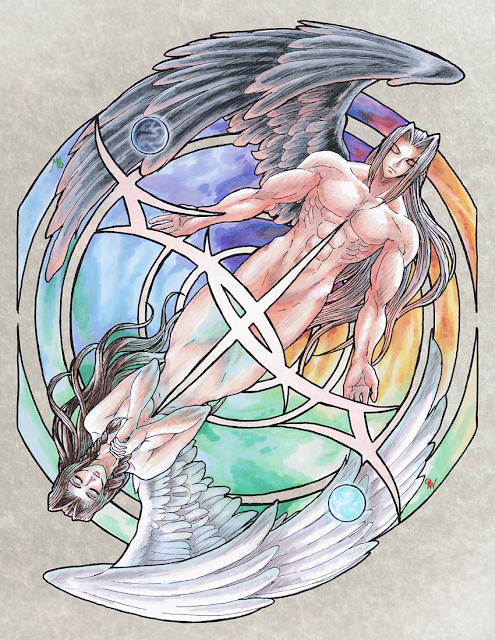 This is a redo of a much older piece. I had it in mind to go back to this one for quite a while, however, the original had a lot of motifs I feel are now rather cliche of me, so I wanted to find a way to make it fresher.
Firstly, I changed the poses held by the two characters, putting Aerith in a prayer stance (which doubles as covering herself, lol), and placed Sephiroth in a powerful outstretched arms pose. It's minor, but adds more dynamics and personality to their presence. I also ditched the Advent Children-esque look for somewhat more classic-faithful models, which I also tried to replicate in the coloring style, mixing markers with colored pencils for a recreation of texture found in Nomura's character illustrations.
Losing the yin/yang motif, I moved the Materias to the sides, being "cupped" by the ends of the central glyph, which to keen eyes is recognized as the symbol used on the title card and opening credits. For the background colors, I wanted the base colors of the materia to start around their locations and swirl into a mix as they approach the opposite, invoking a sort of color wheel look.
As a final touch, I put my signature at both ends so there's no "real" top or bottom to this piece.