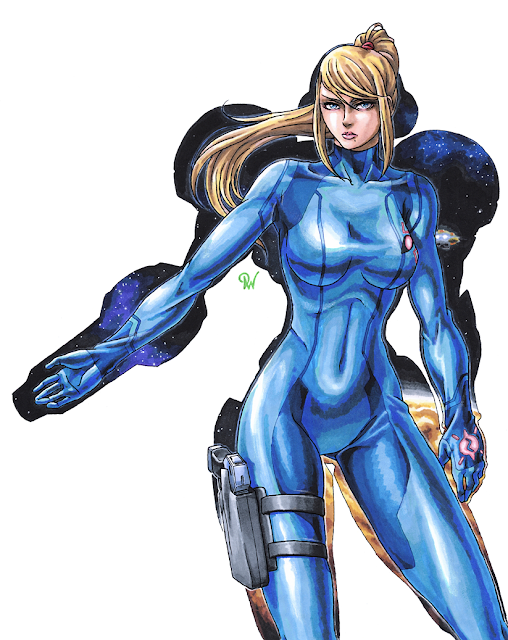 Samus has always been a bit of a hot topic in the classic gaming community. From her reveal at the end of the original Metroid game on the NES, she's always been a bit of a paradox. A slender, athletic woman with the drive of a typical male warrior, and no real weaknesses or stereotypes that tend to hold female characters against that glass ceiling. The epitome of a strong woman, with the only real traces of femininity are held entirely in her physical form, of which is usually hidden under her massive power armor. I wanted to kinda show a balance of that strength, while keeping the piece a bit more stoic. While it's difficult to avoid sexuality when rendering her in her famed Zero Suit, I did so to show her only weakness - not that she's female, but just that she's human.

I chose to still have her armor in the form of a silhouette around her, which I stylized to look like a scene of her Gunship's approach to the planet Zebes; her once-home and her mission field in the original NES game, Zero Mission, and Super Metroid.

Sorry to get all preachy, I actually just always liked that angle of Samus's character - something Other M sorta went against and almost ruined... Ironic, since I picked that version of her Zero Suit, just because I like the aesthetics of it more than from Zero Mission.