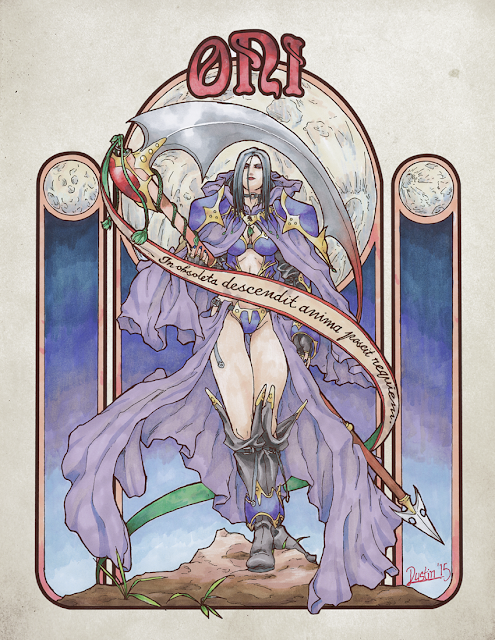 A piece I penned 3 years ago, and a complete overhaul of an illustration I did even further back. I very much love utilizing Art Nouveau styling, even if it is difficult to pull off the natural flow that Mucha was always able to achieve. But despite that, I still had to try, and think it came out better than I anticipated, even if the background is a bit lacking in detail.

I'm trying to get into reusing some of my old original characters, maybe even working my way back to the story itself, but this is a decent start, I think. I have another piece in mind to pair with/counter this piece. Hopefully, I can get that one executed soon.

The banner, for those not fluent in Latin, roughly reads, "The worn down soul seeks rest." 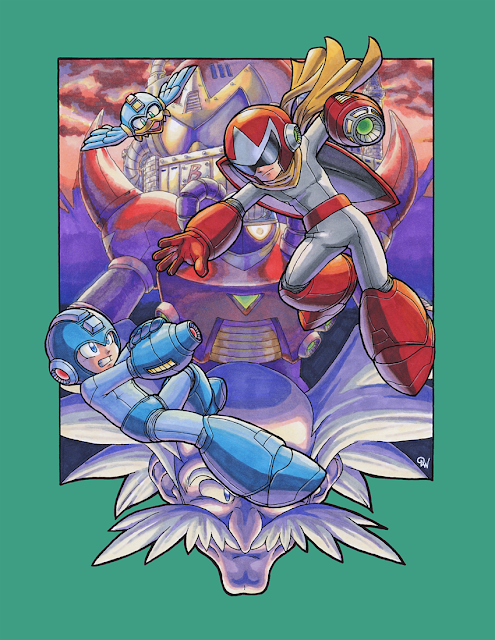 An illustration done for Capcom's Mega Man Legacy Collection Art Contest, the objective is to reimagine a cover art for one of the 6 classic Mega Man titles contained within the collection. I chose Mega Man 5, as I liked the idea of making a genuine rivaly between Mega Man and Proto Man (or was it???). I added a few elements exclusive or new to that game, including Dark Man, a prominent villain toward the end, and also Beat, with 5 being the assist character's first appearance. Also, who's that we spy at the bottom...? (lol)

This piece had a lot of ambition and passion poured into it, and I think it shows pretty well. with the moody color palette, added details, and toned shading, It's a strong possibility this is one of my pictures I can say turned out even better than I anticipated.

And, thanks to whatever deity/deities are in charge, the impression carried over to the judges, as it stands among the other 5 winners of the contest! I'm extremely excited to be chosen on this, and congratulate in fullest the other winners, as had they entered in the MM5 category, I may not have made it! ^^;;;