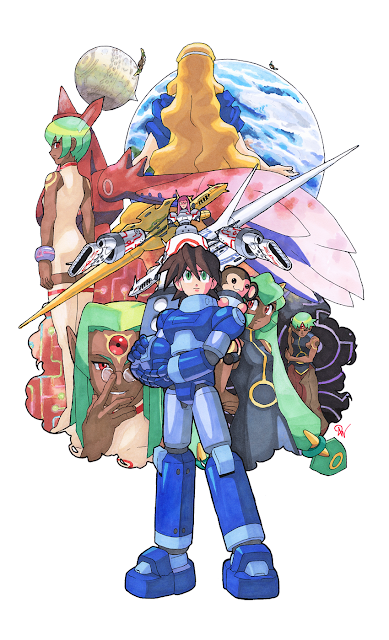 "The Master's Will"
(Mega Man Legends 2)

To say this is a long time coming is an understatement. You all know I'm a fan of Mega Man, but Mega Man Legends is the series that truly grabbed my attention and never let go. The new gameplay notwithstanding, what reeled me in was the amazing story, which was so well written in mysteries that not only your character wanted to solve, but YOU wanted to solve. Legends 2, in particular, did a fantastic job of diving further into this story element; a massive risk for a Mega Man title, to be sure. One that seemingly did not pay off as well as we'd like...

I wanted to focus on the biggest enigma of the series, Elysium and its overseers, the Master System. Nothing of all of them grouped together exists, and it's something I'd always wanted to do for quite some time. I threw Juno in there as well. Despite his absence from MML2, he was the one to drop the bombshell on our hero (and the player) at the tail end of 1. I also snuck in the silhouette of Sera's final form, making her the dividing line between the Master and those who were to keep his order.

Colors were tripping me up pretty bad on this, as I had multiple markers run out on me, and being short-funded for resupplies, had to make due with what I had. Some was salvageable, some had to require some trickery to fix or hide. I debated making a space scene at the very top of the background and have it fade at the midway point, but decided against it. It's not the illustration Mega Man Legends deserves, but it's definitely one I needed to do.

I decided I wanted to revisit the DAICON animations, while trying some more art nouveau stylings; something I'm trying to get better at. I considered having two separate illustrations, but couldn't think of enough to fill the pictures well, so decided on making another joint picture between the two films. I also made the characters much more within my own personal style (Something I don't really do much), making them look considerably more realistic. Though I'll admit, I'm still terrible at discerning a child's facial structure from an adults...

I added the picture to an aged paper texture I found digitally, to give the final look of an authentic Mucha-esque look. Also, because I forgot to during the inking process, I changed the roman numerals of the titles from black to their respective colors digitally, as well.