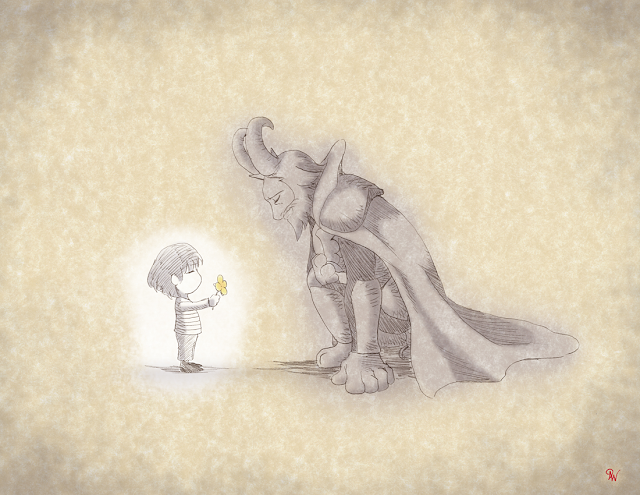 What can I say about Undertale that hasn't already been said? It's the most amazing indie RPG I've ever played, and love its twists in both gameplay and narrative, and I love how much the game is actually playing you, in the end. It's weird how attached you can get to characters in what feels like only a 7-10 hour game.

This piece started as a simple sketch. The human handing the monster a flower. The best part of this concept is the duality of the symbolism, especially depending on how you run the game. It's one that hit me hard in conceptualizing, and had to get it out quickly. I had no intention on coloring it, so instead I just did some digital shading on the piece, transferred it to a copper parchment texture, and erased part of that around the human (I'm intentionally being vague with the characters, as playing this game I feel is best to go in with as little idea as to what it is as possible). I only colored the flower, giving a bit more power to its presence, as small as it may be.