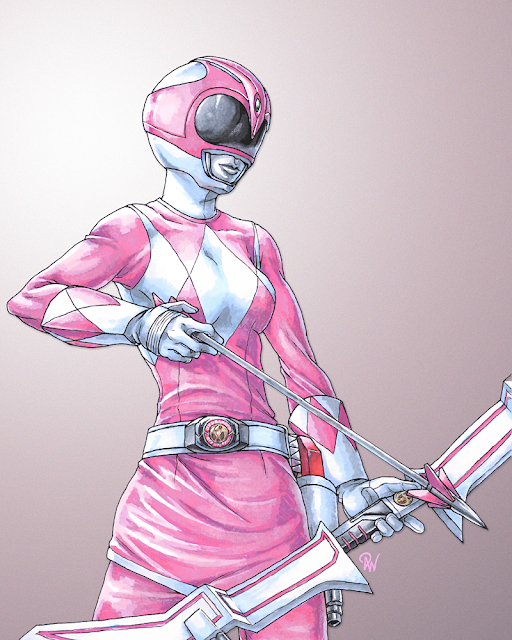 I'd been trying for a few years to do more pieces for the original Zyuranger/MMPR crew, but kinda got overwhelmed with my original format that I had done with Green Caesar and a few other Sentai works. However, I thought to do something more stoic, but trying to up my sense of natural stance and lighting. I chose the Ptera/Pink Ranger as my first subject because I never did any of the females, prior.

I tried my best to capture all the little details of the suit itself, right down to seams in the sides and front, and even the pad detail of the gloves. The buckler wording unfortunately took thicker than I was hoping, so that part ended up quite messy, up close especially. Getting things such as how the spandex and the hard plastic shines with the light source to the back quarter were things I had to figure out on my own, as I don't have many mobile lights in my work space to properly experiment.

I added the background post-scanning as I thought the image to be too weak on its own without something for it to pop against. And I lack marker colors to get the particular gradient in the way I could here.