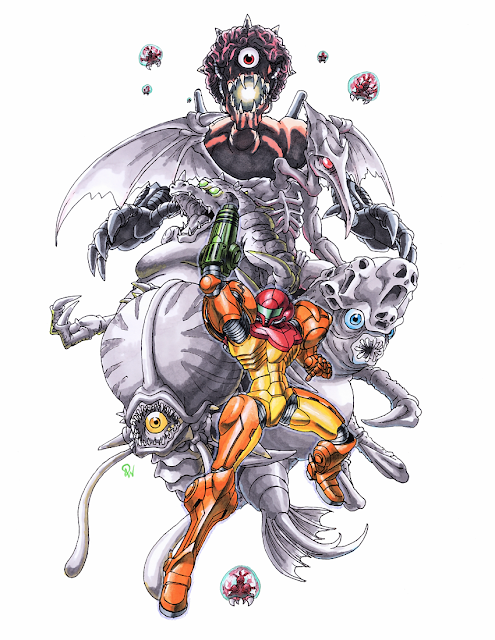 Yet another Metroid piece, it seems. (lol) I figured it was about time I did a piece for the first in the series that I ever played, Super Metroid on the SNES.One of the largest games, for its time, especially; full of enemies, traps, hidden secrets, and horrifying bosses. It's always a blast to replay, and despite playing it rather late in my life (I only beat it for the first time less than 10 years ago), it holds such high nostalgia for me.

For this piece, I wanted to remain true to all reoccurring party's looks for SM specifically. This almost proved difficult, alone, because very little resources are floating around online in good clarity (To which I blame on the lack of art or data books). Still, I managed to use what I could find, which nearly floored me when I saw how the Draygon's head crest is... O___O;;;
I even tried to keep the coloring style as close to the original as possible, but, as always, my own styles always seep through.I think it did well for this piece, as it allows 3 distinct segments to draw your eye; Samus, the 4 generals of Zebes, and Mother Brain. The Metroids floating around sorta frame the piece a little, including the baby at the bottom.