I Wanna Get the Kitty! 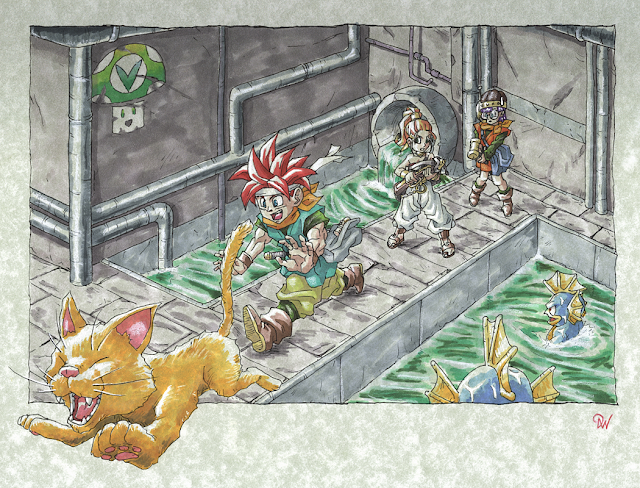 "I Wanna Get the Kitty!"
(Crono, Marle, and Lucca from Chrono Trigger / Gift art for Vinesauce)

Over at Vinesauce, Vinny is playing Chrono Trigger; arguably one of the best RPGs ever made, and his self-proclaimed favorite game. When he was messing around on his second stream trying to "catch the cat" in the sewers in 2300 AD, something inspired me to do a piece reminiscent of Akira Toriyama's original illustrations for the game.

I actually did the lineart for this piece twice, as the first time I did it was heavily rushed to display on their booru (to which he showcased that night). I decided I could do better, to which I feel I did indeed. To keep in line with the mock-style of Toriyama's works, I had the new lineart printed onto parchment paper to give it a bit of mood toning. Using the white pencils and gel pens on this colored paper really pops the highlights. The Vineshroom on the wall was a last-second addition to the lineart before coloring to personalize it to the stream.