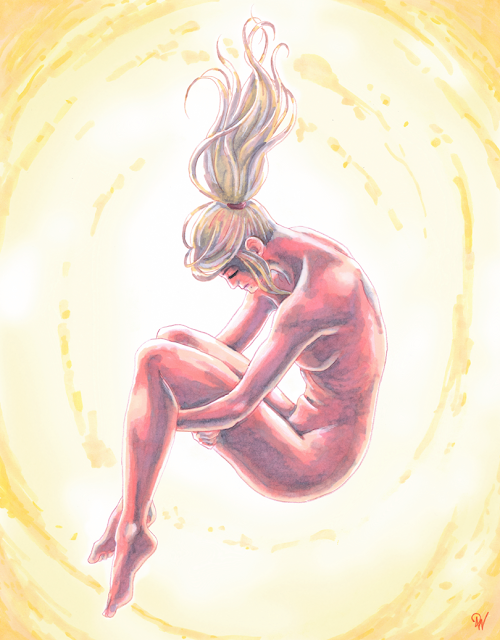 I guess chalk this piece up to the fact that there was an ability in Super Metroid (and some later games) that I had absolutely no idea existed prior to about a month ago. The Crystal Flash is a technique you can use in truly desperate situations to heal all of your energy tanks at the cost of all your special weapon energies. This places Samus in a healing ball, shed of her armor and otherwise defenseless, but growing strong again.

I tried to tell myself the next time I drew Samus would be in her trademark armor, but it seems I went even further back and put her in less than the last one. (lol) I tried to make this look as soft as possible, but of course, my markers will always leave some rather rough lines, still. Fortunately, using pencil instead of pen for the lineart definitely aided in the light look and I feel countered where the markers were working against me. I actually had to do a little extra digital work on the glow, as one of my markers unknowingly ran out, and I'm not sure when I can replace it. It was a subtle touch up, but one that was needed to complete the effect.