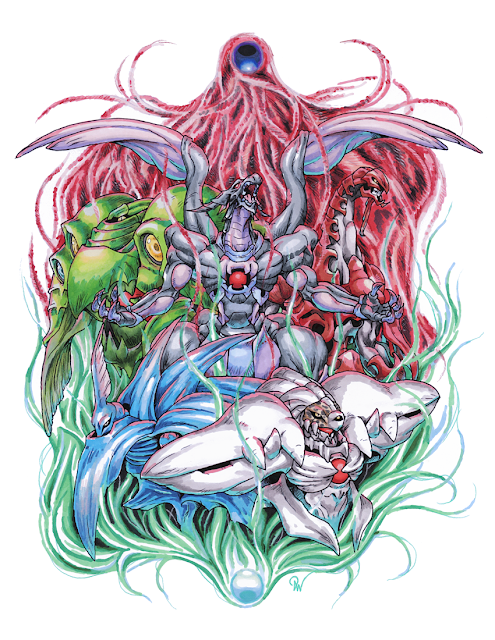 This one took me quite a bit longer than I thought! (lol)

I always liked the concept of the Weapons from FFVII. Something about a "natural mecha" was very interesting to me, especially when I was younger. That giant-robot-meets-kaiju appearance and backstory made these unique in the Final Fantasy realm, as well as their almost ambivalent purpose.
I threw in the battle between the White Materia Holy and the Black Materia Meteor, using the Lifestream versus Sephiroth's Negative Lifestream. So it was a theme of black vs. white, green vs. red, and the Weapons as the neutral middle.

I started this one only a couple months ago, getting the lineart done in only a couple of days, with full satisfactory. but coloring it had me stumped. I had roughly two other attempts, with one getting rather far before I started to feel unimpressed with the turnout. To be honest, even this final one doesn't quite feel like it's anything like I envisioned. Perhaps something like this was better left to digital mediums. (lol)

Unfortunately, the worst part is some of the finer coloring details may have been lost in the scanning process, due to my scanner washing out light colors. Something I can usually correct in post-scanning, but the complexity of the outline rendered that difficult, if not, impossible.