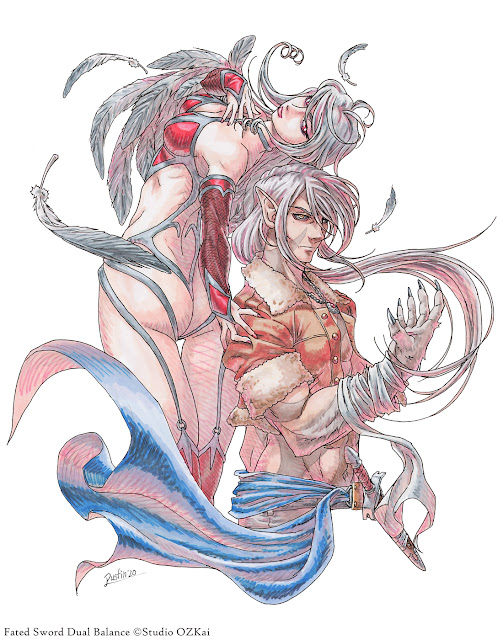 “You believe we’re incapable of love?”
“Not at all. I’m just lamenting that we weren’t given any purpose for love... as they had been.”

I inked this one probably a good month ago, but lost the motivation to finish it due to ongoing events in the world, at the moment. But, enough time with nothing to do will even reawaken motivation out of sheer boredom, apparently?
I'd been wanting to do an illustration for Grey and Heart for some time now, but finally got the layout in mind probably late January, iirc. I had something more fierce for Grey, originally, but decided to make him more calm while still showing a hint of his bestial physiology. Heart's pose was one that underwent a few different trials before landing on this one to balance and frame the piece.
Colors were pretty much decided to keep them in line with Oni's red under-lighting. Though, I admittedly almost messed up Heart's arm hosiery as I first colored it the same as the red bits. Thankfully, making it a darker color was doable and fixed it in a clutch.