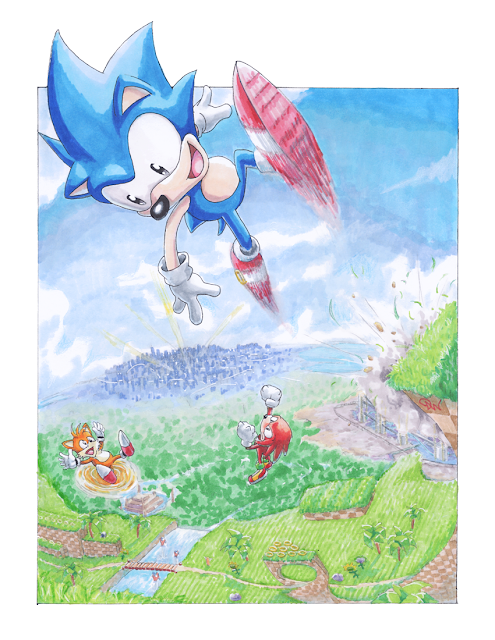 Admittedly, I'm not a Sonic fan. Or rather, I never grew up with Sonic. I played a few games here and there when visiting friends and relatives who had a Genesis, however our household was SNES. That being said, my small time with those classic cartridges made me understand why Sonic is so revered by his fans... And why the 3D generation has had them so downtrodden over the franchise. I still have yet to play Sonic Mania due to the PC version delay, however, I am definitely on board the hype train for it, especially for my wife, who had grown up with Sonic and knows Sonics 2, 3, and 3&K  like the back of her hand.
Oddly enough, I had this picture in mind for quite a while now, but kept it stewing until it bubbled over. And I'm glad I did, because the final product is bounds over the minor ambition the original plan was. I tried my best to let the colors do the talking rather than thick dark ink lines and crisp cel-style shading. The background had a LOT of ambition poured into it, but I think despite my many flubs and supply issues, it still turned out well.
Trying to imagine what the Chemical Plant Zone would look like from an outside view was kinda difficult, so I kinda tucked it away. lol